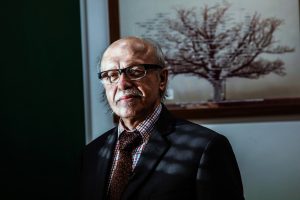 Prof. dr. hab. Mariusz Lemańczyk, graduated from Nicolaus Copernicus University in 1981, where he also received PhD in 1985. In 1991 he got the degree of doctor habilitated from Warsaw University and was granted the title of professor in mathematical sciences in 1998 by the President of Poland. For many years (till February 2020) he has been the director of the Chair of Ergodic Theory and Dynamical Systems at Nicolaus Copernicus University. He was also the vice-dean for science of the Faculty of Mathematics and Computer Science  (1999-2005, two terms),  the dean of the Faculty  of Mathematics and Computer Science (2005-2008) and a member of the Senat of Nicolaus Copernicus (1999-2008). Since 1996 (except for the term 2014-2017) he has been a member of the Scientific Council of Institute of Mathematics of Polish Academy of Sciences. He was the PI in 4 research grants and a supervisor of 8 PhD’s students. He is a laureat of several prestigious Polish awards:

He is a world expert in ergodic theory and dynamical systems (more than 110 published research articles) in interactions with combinatorics, geometry, information theory, probability and spectral theory. For the last decade, through Sarnak’s conjecture, his research is also oriented toward applications in analytic number theory. Holding a prestigious special Jean-Morlet chair in 2016 at Centre International des Rencontres Mathematiques in Marseille  was one of recognitions of his high international position and influence. He also received a conference grant (together with Maksym Radziwiłł from Caltech) from the American Institute of Mathematics. He closely collaborates with top mathematicians all over the world: Bielefeld University, Caltech, Hebrew University in Jerusalem, Institute for Advanced Studies (Princeton), Moscow State University, Ohio State University, Technical University in Vienna, Tel Aviv University, Universite d’Aix-Marseille, Universite d’Haute Normandie, University of Maryland, University of Zurich. He has been a member of the Editorial Board of one of the most famous Polish journals “Studia Mathematica” since 2006.